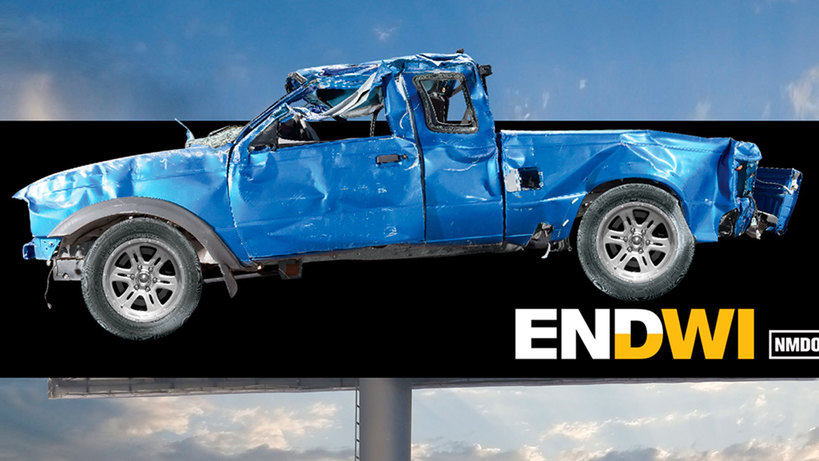 Santa Fe, NM – Some of today’s most creative, effective ads in out of home (OOH) media are posted by state departments of transportation, on behalf of safety.

In May, Colorado DOT’s billboards, bus shelters, and bus ads won national recognition in multiple creative categories at the annual OBIE Awards sponsored by the Outdoor Advertising Association of America.

“Out of home is incredibly important, because our audience is in the car,” says Richard Kuhn in Albuquerque at creative agency RK VENTURE (its client roster includes New Mexico DOT).

Alcohol-related fatalities in New Mexico have declined significantly (417 in 1980 to 120 in 2015).  The state says media helped push the trend.

“New Mexico has made great strides in reducing DWI fatalities over the past several years by combining high-visibility enforcement along with a robust media campaign and one of the strongest interlock laws in the nation,” said New Mexico DOT Cabinet Secretary Tom Church (an ignition interlockdevice prevents a vehicle from starting if the driver has been drinking).

States receiving federal grants file detailed reports on paid media.  Here is a sample from Oregon DOT, regarding a campaign to increase seat belt use in pickup trucks: 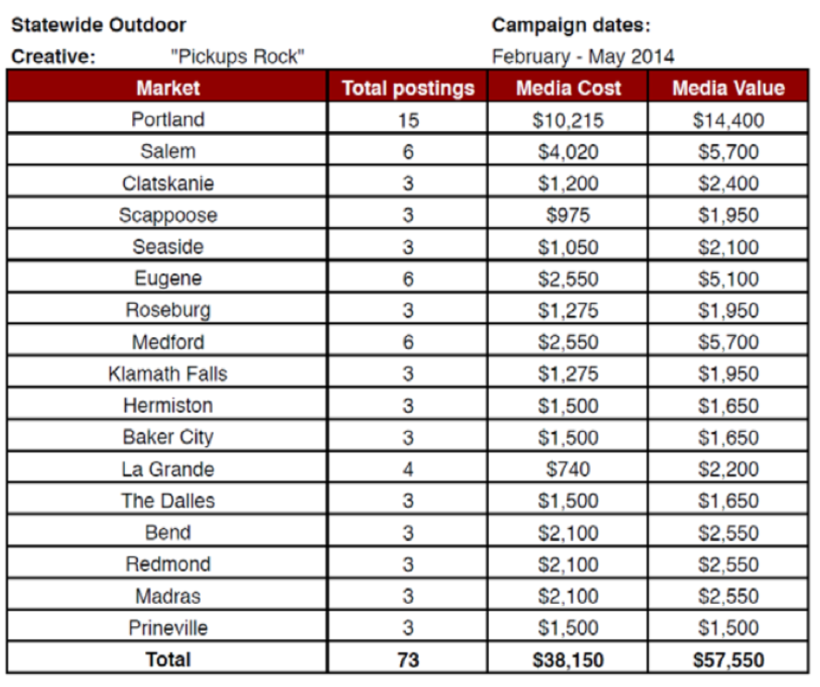 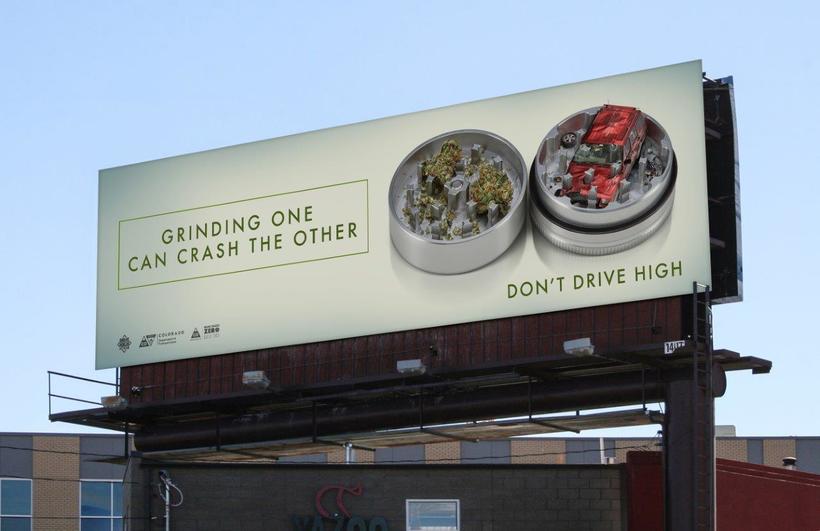 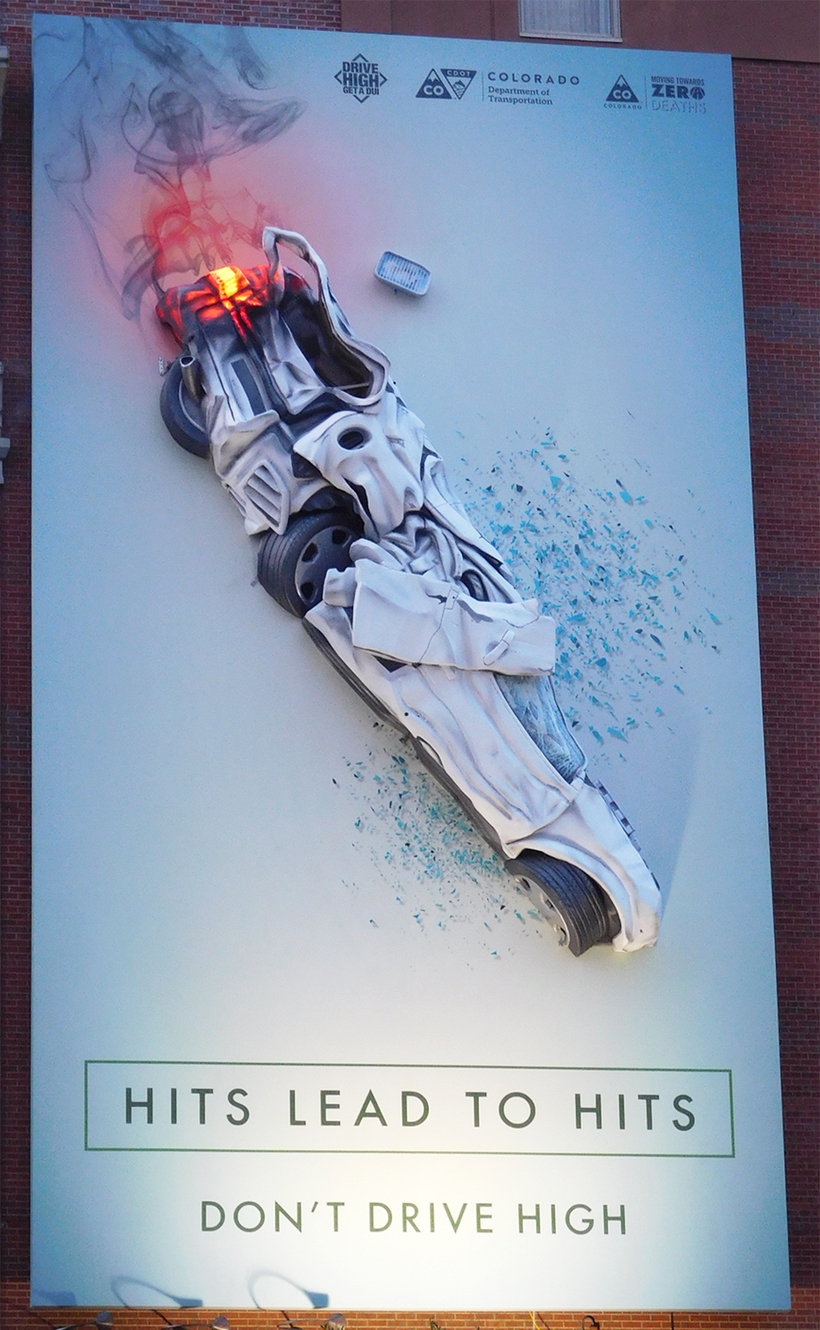 “Our team was inspired to spread a simple message without being preachy or stereotyping people who use marijuana,” the ad agency said. “If someone were to really make a joint the size of our 3D joint car, it would use $19 million worth of marijuana.”

Safety experts and psychologists have long sought effective methods to changebehaviorin a society thatfavorsspeed and alcohol.

It took decades,butattitudes andbehaviorchanged regarding drunk driving and seat belts, with billboards a key component of the media mix. 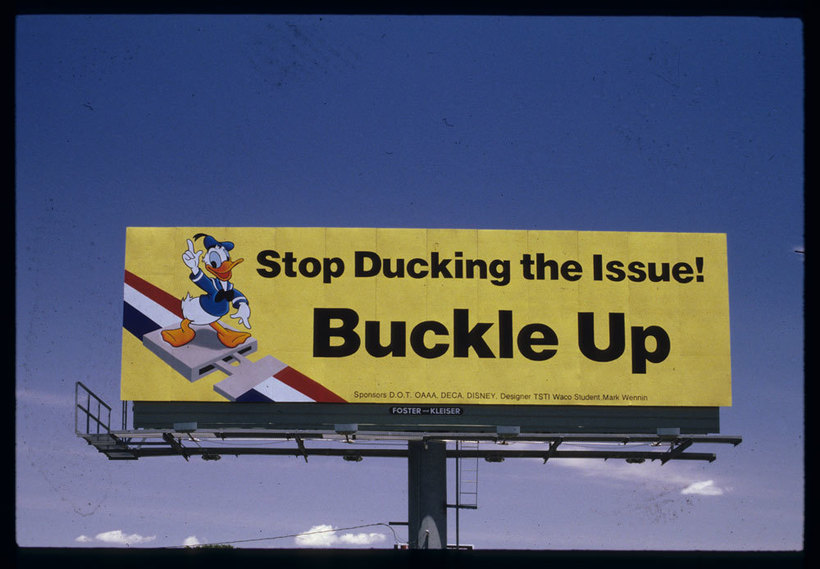 The pros agree that fear of consequences (arrest, punishment, embarrassment, out-of-pocket costs, and-or loss of mobility) combined with preservation instincts (protection of self and loved ones) can change behavior.

“Kids get in the car and tell the parents, ‘You can’t do that,’” says Laura Garcia at ad agency Marketing Solutions, which places media for New Mexico DOT, referring to children’s admonitions against risky behaviors.

As more states legalize marijuana, the effects of cannabis are not well understood, Jack Danielson, executive director of NHTSA, told a congressional hearing on July 18.  With pot usage increasing, the government wants to devise standards to define marijuana impairment and create methods to test drivers.  “This is going to take a while,” says the federal safety agency. “Until we get a standard, states will use education and awareness.”

Pro-safety Transportation Secretary Ray LaHood (2009-2013) was alarmed by the number of distraction-related deaths, injuries, and property loss.  His federal agency –borrowing tactics that changed behavior on seat belts and drunk driving– awarded grants to states to experiment with high-visibility enforcement to stop texting while driving, combined with media blitzes.

In Connecticut, the multi-media push included “digital billboards on major Hartford interstate freeways I-84 and I-91.  The billboard message also ran at the XL Center, a sports and concert venue in downtown Hartford,” said a federal safety report published in 2014.

Government-sponsored safety message on digital billboard along I-91

Observed cell phone use declined 57 percent after the blitz in the Hartford area.

When Nothing Goes According to Plan

I’ve built a career in disciplines that require me to be a planner. Every detail, workstream, and potential snafu (real or imagined) needs to... weiterlesen
AGENCY: ,

We’ve all been getting creative with our time at home, and many people are using it to work on themselves. Amélie is no different.... weiterlesen
AGENCY: ,

Lessons learned from a 25-year career in Advertising. When you’ve been in the industry as long as I have, you collect a lot of... weiterlesen
AGENCY: ,

Don’t throw the phone Lessons learned from a 25-year career in Advertising When you’ve been in the industry as long as... weiterlesen
AGENCY: ,

Over the last few months COVID-19 turned many lives upside down, including the lives of advertisers. We were forced to quickly reevaluate and... weiterlesen
AGENCY: ,
Mehr News sehen